Table: Reference levels for electric and magnetic fields for occupational and general public exposure in Bhutan

Since July 2018, the Authority has started to monitor and measure the EMF radiation level of BTS stations (towers) in the country and has certified EMF compliance to 357 BTS towers in the country mainly falling in urban areas and satellite towns of following Dzongkhags:

The Authority will continue to monitor and measure all the remaining mobile towers in the country and will be issued with the certificate of EMF threshold compliance. 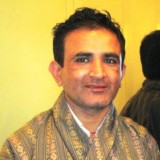